In March 2015 I jetted off to Barcelona for a packed weekend of sightseeing with a friend. We managed to do the whole trip in a weekend, leaving after work on Friday and returning Sunday evening. While I would have loved to spend more time there, sometimes it’s nice to travel in short sharp bursts (and it gives you a great Monday morning ‘what did you get up to at the weekend’ story). Below is the two-day itinerary I used. You can see my full itinerary, which I’ve updated to reflect what I’d do differently if I went again, on my itineraries page.

We flew from Stansted (meaning we could leave London at around 5:30pm on the train) and arrived on Friday night at 11:30pm, grabbing the Aerobus A2 to Placa Catalunya, which we extremely quick and easy at around a 35 minute journey. The bus departs every 10 minutes between 5:30am and 1am and costs around 6 Euro for a single or about 10 Euro for return within 15 days.

We stayed at Anba Bed and Breakfast on Ronda de Sant Pere, which is only a short walk from Placa Catalunya and is also walkable to Sagrada Familia (around 30 mins), and just about anywhere else if you’re fairly active. We only used the metro a handful of times and that was typically to save time on our tight itinerary rather than because of the distance. Anba has really lovely accommodation and tasty, filling breakfast. They even supply a laptop in the common area which connects to their printer, which is great if you want to book tickets for the rest of your visit.

The staff were very helpful and accommodating, waiting up for our arrival until past midnight and giving us some really sound advice about booking tickets for Sagrada Familia ahead of time, which they sat and did for us before we went to bed. We booked for early the next morning and went to bed really excited to visit- we were both big fans but had never visited before.

Although it was March, we had a lovely sunny day, a cool breeze but hot in the sun. We walked the 30 mins up to Sagrada Familia and were very happy to have already purchased a ticket when we saw the queue already forming. After a quick look around the outside, we headed in.

It really is a spectacular piece of architecture. Very few times in my life have I been overcome by a place, but it’s the epitome of breath-taking. The soft off-white soaring columns dappled with coloured light from the window glass don’t quite look real, it looks like something from a movie set.

While we were there we explored one of the towers, which gives you amazing views out across Barcelona as you climb, as well an opportunity to see some of the exterior decoration more closely.

View from the tower of la Sagrada Familia, Barcelona

Opening hours vary through the year, but typically the Sagrada Familia is open 9am – 6pm (with more limited hours over the Christmas period) and later closing in March and October (9am – 7pm) and from April to September (9am – 8pm). A ticket for the Sagrada Familia, towers and an audioguide is currently 29 Euo for an adult. It is definitely wise to book yourself a timed entry slot ahead of your visit to avoid the huge queues, you can book tickets here. 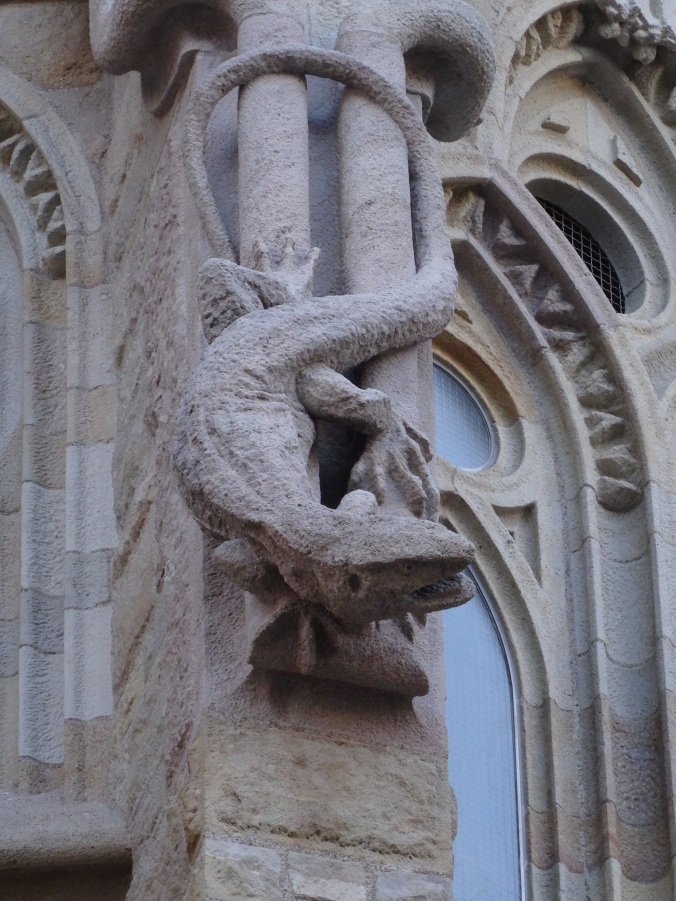 A lizzard crawls down the buildings, exterior detail of la Sagrada Familia, Barcelona

Afterwards I had planned out a walking tour of some of the best architecture Barcelona has to offer, passing Casa de la Punxes (designed by Joseph Puig i Cadafalch, a contemporary of Gaudi), with its soaring turrets like a medieval castle, and taking in Casa Mila (La Pedrera, ‘the quarry’) on our way to lunch in Mercat de la Boqueria (open Mon-Sat 8am – 8:30pm).

Casa Mila, is a huge building on a corner, making it strikingly prominent in the street. It was the last private residence designed by Gaudi between 1906 and 1910 and is nicknamed ‘the quarry’ due to the appearance of the stone façade. The interior is also beautiful and the roof a playground of sculptural elements, a great place to bask in the sun and take in views of the surrounding city.

Sculpture on the roof of Casa Mila

Sculpture on the roof of Casa Mila

Blues skies and sculpture on the roof of Casa Mila

Moving on from Casa Mila, we set off towards Mercat de la Boqueria along the Illa de la Discòrdia (‘Block of Discord’) stopping to inspect a number of other modernist buildings, including Gaudi’s beautiful Casa Batllo, whose roof looks like the ridged back of a sleeping dragon, Casa Amatller with its geometric, Moorish and Gothic inspired façade (by Joseph Puig i Cadafalch) and Casa Lleo Morera (by Lluís Domènech i Montaner).

Our destination was Bar Pinotxo, stall number 91 in the market, where we were lucky to get a seat almost immediately. This place had great reviews and did not disappoint. There isn’t really a menu, you just decide whether you want meat or fish and the guy behind the counter keeps cooking whatever dish is next up and delivering it to you with ample helpings of bread until you’ve had enough. You’re then charged for the number of dishes you ate. It wasn’t especially cheap (probably because of how much we had!) but it was an awesome experience. It was clearly very popular as a wall of people formed behind us waiting for our seat.

When we’d finished we explored the market a bit before heading off for more sightseeing, taking in some of Barcelona’s medieval architecture in the Barri Gotic. Most of the neighbourhood was built in the 19th and 20th centuries but a number of medieval buildings remain including Santa Maria del Pi, a 14th Century church sporting a huge octagonal bell tower rising to 54 metres. Sadly the church was gutted by a fire deliberately set in 1936, and restored after the Civil War. We also visited Barcelona Cathedral, ‘La Seu’, completed between the 13th and 15th centuries. Although it appears to have a strikingly ornate late Gothic façade, it was in fact constructed in the 19th century over the buildings original plain front.

So that we didn’t miss out on the culinary delights of Barcelona on such a short stay we had two dinners that night! First stopping at a very authentic tapas bar, Bar La Plata on Carrer Merce with a tiny menu where they served you whatever they have portions of along with small glasses of beer. We had some whitebait and tomato on bread and some chorizo. After sampling everything they had on offer, we walked around the corner and stumbled on another inviting tapas bar, Sensi on Calle Ample, where we had glasses of sangria with more tapas and some cheese to finish. We were absolutely stuffed, but what a great gastronomic experience.

We started the morning exploring the Museu d’historia de Barcelona (MUHBA) in Placa del Rei (open Tues – Sat 10am – 7pm and Sun 10am – 8pm). The museum straddles the archaeological remains of the Roman and late antique city and is combined with the medieval royal palace in Plaça del Rei which includes the 14th century Saló del Tinell 14th century chapel of Saint Agatha, complete with 15th century altarpiece.

The museum covers the history of Barcelona starting with finds from Roman times onwards and was a great way to see some of the much earlier history of the city after seeing so much of its 20th century history during the day.

Having bought the tickets the night before (recommended – you can do so here) we headed to the Picasso Museum (open Tuesday – Sunday 9am – 7pm). The museum is practically exhaustive of the artist’s earlier work. It’s a huge and fascinating collection of works including paintings from Picasso’s Las Meninas series, after Velazquez. 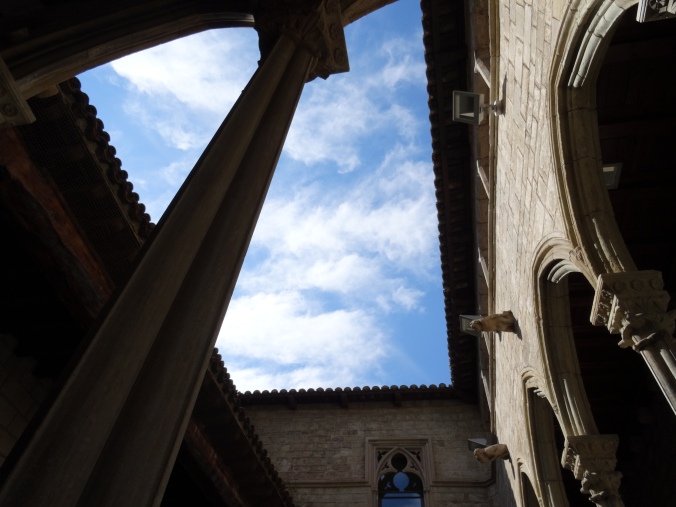 We then grabbed some octopus lunch (yum) followed by some delicious pastries and wandered around through the Parc de la Ciutadella and explored the El Born Centre de Cultura i Memoria, an old market complex with opened in 1876 which it was later revealed stood above an archaeological site showing the footings of the houses and streets of 1700s Barcelona.

By 6:30pm it was time to get back on the airport bus, which leaves from right outside the El Corte Ingles department store on Placa Catalunya, exhausted after an action packed weekend!

2 thoughts on “A weekend in Barcelona – 2 day itineray”