Vatnajökull National Park is home to Vatnajökull, or Vatna Glacier, Iceland’s largest glacier and one of the biggest in Europe. It covers more than 8% of Iceland. Skaftafell is usually used as a base for those visiting the area, which is exactly what we did.

There are a number of signposted walks around the area which vary in length and difficulty. We opted for one of the more popular sites, Svartifoss waterfall (‘black falls’), a narrow waterfall with a spectacular background of huge black hexagonal basalt columns, which puts you in a mind of a pipe organ.

View from hike to Svartifoss waterfall in Vatnajökull National Park

A number of the hiking routes around the area can be found here. I think we used route S2. We opted for the easier routes as many routes recommend crampons (I think ours did too!) and we only had enough time for 3 hours of walking so we could fit in the rest of that day’s itinerary.

As it was still very early spring and a lot of snow and ice remained on the trail, it probably would have been sensible to have crampons. It was pretty slippy and treacherous in places, especially as it began to slope down towards the waterfall. The uneven and icy ground can make for slow going, so be generous in estimating how long the walks will take you to complete.

Icicles cling to the basalt columns at Svartifoss Waterfall, Iceland

The beginning of the hike was steep but easy, but as the path gave way to icy we slowed considerably, with my friend resorting to the safer but more ridiculous method of sliding down on her butt in places. You get some great views of the rounding landscape and mountains from the top of the climb before descending down towards the river that leads from the waterfall.

Svartifoss itself is gradually revealed as you round the last corner on the rocky descent from the hills above. In March it was a wonderful sight, flowing freely but still flanked by a few icicles hanging from the basalt columns. We had apparently arrived the first week it started to get warm (annoyingly meaning our ice cave tour was cancelled due to them starting to melt), which made this hike slightly easier.

After watching the falls and taking plenty of photos, we crossed the river and headed up the other side for the walk back. This part of the path was less icy but was still a difficult, slow walk due to the mud and uneven ground. 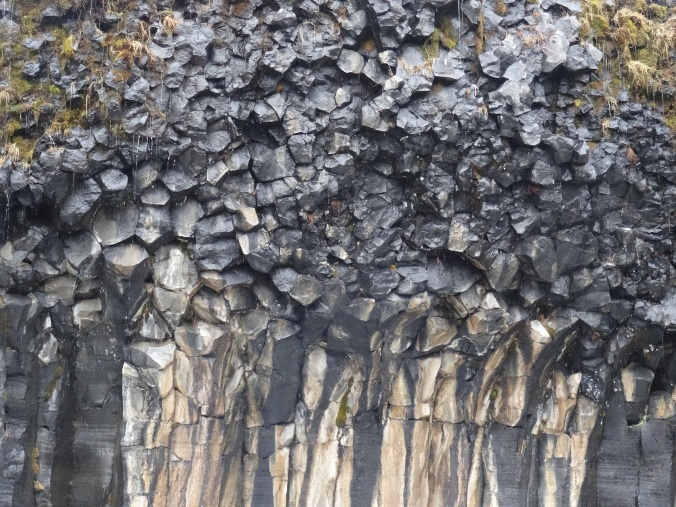 Our next stop was Jökulsárlón glacial lake, a fantastical lake at the head of the Breiðamerkurjökull glacier full of large and small icebergs. They float slowly around the lagoon and eventually out to see. Seals love to bask in the sun there, using the pieces of ice as giant lilos.

The lagoon was formed when the Breiðamerkurjökull glacier began to melt and retreat from the sea. It covers an area of around 17 square kilometres. Allegedly some of the ice will spend 5 years circling the lagoon before finally making it out to sea. 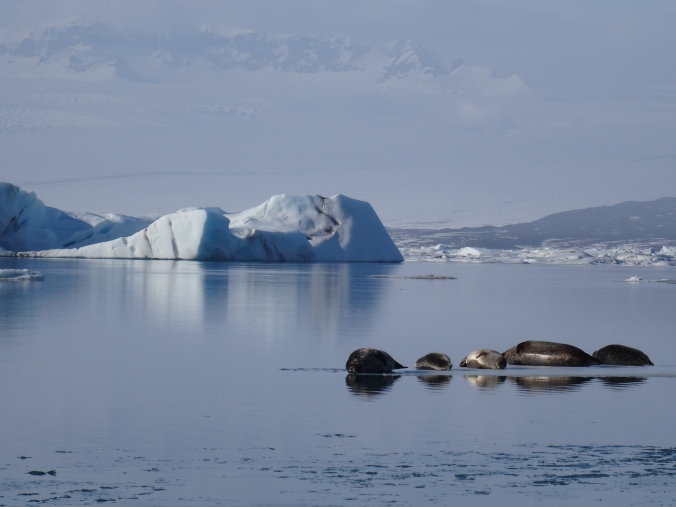 We spent quite some time watching the seals in the lagoon and marvelling at the luminous blue of some of the ice.

We hit the open road again for a tour further alone the south coast to the fishing town of Höfn. Mile upon mile of beautiful scenery passed by, from mountains to lakes, waterfalls gushing down the sides of black rocks and the odd farmhouse alone in the countryside.

We didn’t look around Höfn but stayed for a our first good meal since Reykjavik a Kaffi Hornið, where we were greeted by a rather ropey looking stuff fox. The food, however, was excellent- a huge steaming bowl of lobster soup washed down with a reindeer burger.

Sunset behind from the derelict buildings on Iceland’s Ringroad

The sun set as we drove back to our Skaftafell hotel and we popped back into Jökulsárlón to watch the sun dip behind the glacier, watching the icebergs float serenely on the water. This was such a beautiful sight, even more welcome as the weather had been largely overcast during our stay so far. I wholeheartedly recommend that you pop into the lagoon at sunset if you’re in the area at the right time.