If you’ve got a big appetite and a day to spare, you can do worse than heading to East London to eat your way around Spitalfields and Shoreditch.

An area that Londoner’s know and love, which is gradually becoming frequented by tourists to London too, it should be a firm fixture on anyone’s London travel itinerary.

The one thing everyone knows about this area is that it’s squarely in Jack the Ripper territory. A number of tours criss-cross the area throughout the year, which are probably a good way to see this part of town (although I’ve never been on one)- although I much prefer the approach of eating your way around. 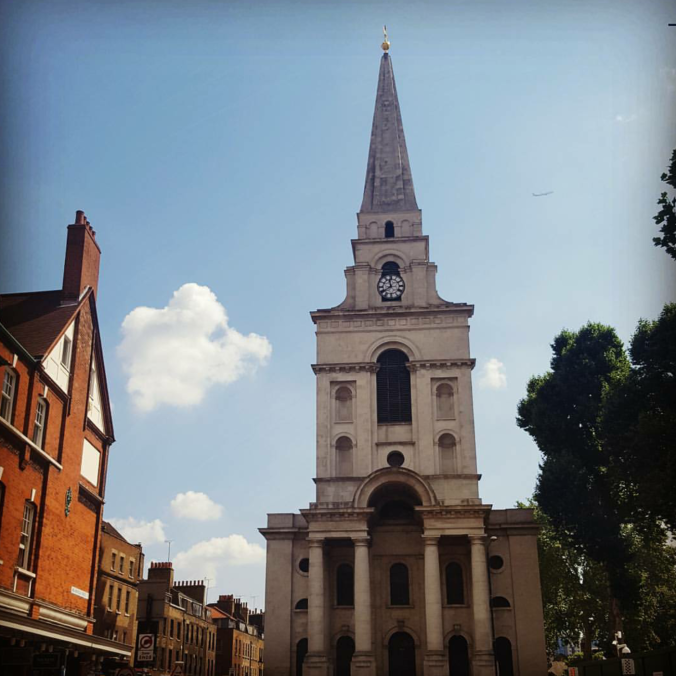 But the history of the area is far more interesting and diverse than the elusive Jack. The area was first made home by French Huguenot silk weaves in the 17th century, hoping to escape the restrictions of the City Guilds by settling outside the City. Terraced houses were built in the late 17th and 18th centuries to house the silk weavers, with some larger houses built around Spital Square. A number of these original Georgian townhouses can still be seen in the centre of Spitalfields, towered over by the 18th Century Nicholas Hawksmoor church, Christ Church Spitalfields.

As the silk trade declined, Victorian Spitalfields became synonymous with slums and poverty, with the once grand houses becoming multi-occupancy tenements. It was against this backdrop that Jack the Ripper stalked Spitalfields and the surrounding area in 1888.

Through the years, the area had continued to be centred on the textile trade, with Jewish settlers first taking over from the French, and later the Bangladeshi community moved in and made the area home.

Its history has conspired to leave Spitalfields and the surrounding environs a fascinating and culturally rich area, where you can sample foods from every corner of the globe, while marvelling at the beautiful architecture, the hustle and bustle of daily London life, and the concrete and glass spectre of the City of London which looms ever closer to the West.

The food tour – what to eat

So what better way to get acquainted with some of London’s diverse history, than to sample its food? I’ve pulled together a self-directed walking tour, which takes in a some of my favourite places to eat, as well as a few other notable sights along the way. The amount of food choices here can seem overwhelming and searching for the best bites can be tricky if you’re not local. The selection below will steer you through this minefield and to some top notch East London eating.

The tour is probably best done as a group of at least 4, to give you the opportunity to try as much food as possible before you’re fit to burst. The loop starts and finishes at Aldgate East Underground station (although you can mix and match with Liverpool Street if it’s easier) and covers about 2.5 miles (4km). It’s all flat and easy walking and you can make it last all day if you want- otherwise go as fast or as slow as your stomach will allow!

Here’s the first half of the map, and then it’s straight on to the food!

I’ve now maxed out the number of stops Google maps will allow me, so the second half of the trip continues on a second map!

I’d love to hear about your experiences if you use any or all of this itinerary, so feel free to get in touch. You might also like my favourite ‘hidden gem’ restaurants in London, which you can read about here.

One thought on “Spitalfields and Shoreditch foodie walking tour”