I was expecting Zadar to be like Split and Dubrovnik, a tiny, perfectly formed and intimate little city. Zadar is in fact a real mix, even in the very centre, where ugly 60s concrete structures sit next to the earliest and rarest of Byzantine churches.

It was an odd move in town planning (assuming, of course, that it was planned). But I didn’t really mind, I was there for the churches and could happily turn a blind eye to the occasional eyesore.

The very centre of the town sits on a peninsula jutting out into the sea, which feels like a town within a town. Outside of this, Zadar is quite large with a population of 75,000. 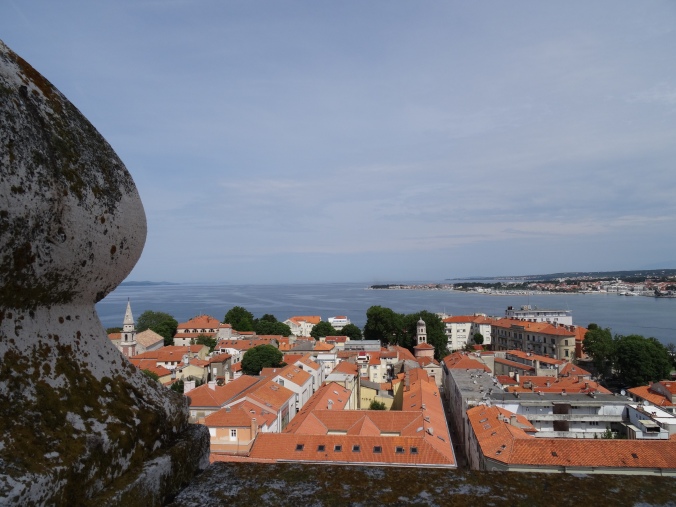 Zadar from the Cathedral bell tower

Zadar was the ancient capital of Dalmatia so is rammed with antique treasures, including the remnants of a Roman forum and, most notably, its plethora of Romanesque churches. I planned a walking route on the free map we got from our rented apartment to see all the churches and other sites I was interested in for the day we were in Zadar- I’ve recreated most of this in the Google map below. Unfortunately I couldn’t get all of it to embed, so here is the full link https://goo.gl/maps/QhSGcCYLcAB2.

We had seen the cathedral the evening we arrived since it opened late (except the bell tower) but went back for a second look. It has subtly coloured marble columns and the facade is punctuated with rose windows and carvings in the arches of the Romanesque doors. 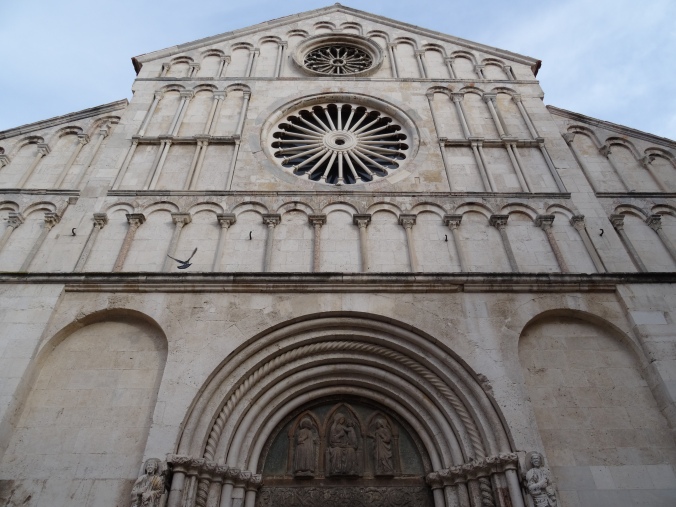 Facade of the Cathedral of St Anastasia, Zadar

Statues of the apostles and angels still line the door frames in remarkably good condition given the building is 12th and 13th centuries. The frieze around the cathedral is particularly interesting, with a length of twisting acanthus spotted with various different animals, including some interesting scenes such as a dog and bird fighting over some grapes. 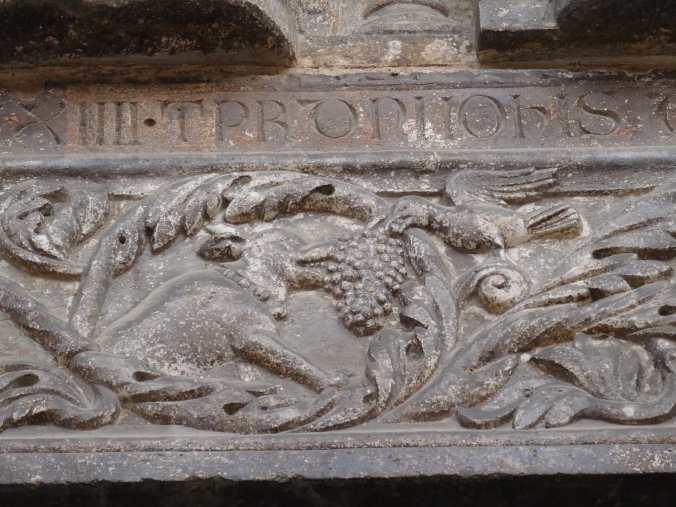 Detail of a relief on the Cathedral of St Anastasia, Zadar showing a dog and a bird fighting over grapes 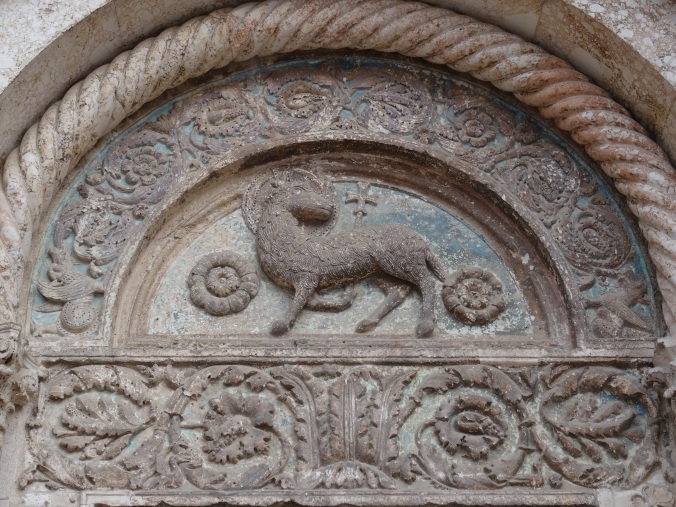 Detail of tympanum on the Cathedral of St Anastasia

Behind the cathedral is the 56m high bell tower with commanding views across Zadar and the sea. It’s a tough climb but totally worth the views, although you have to pay 10 kuna for the privilege. 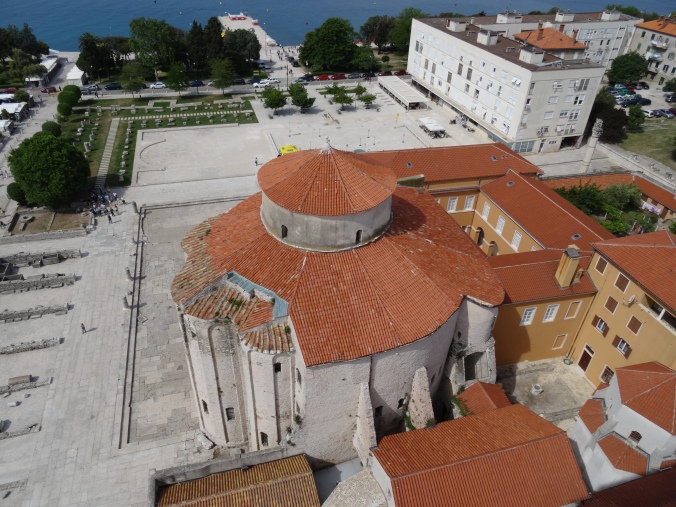 View of the Church of St. Donatus from the Cathedral bell tower, Zadar 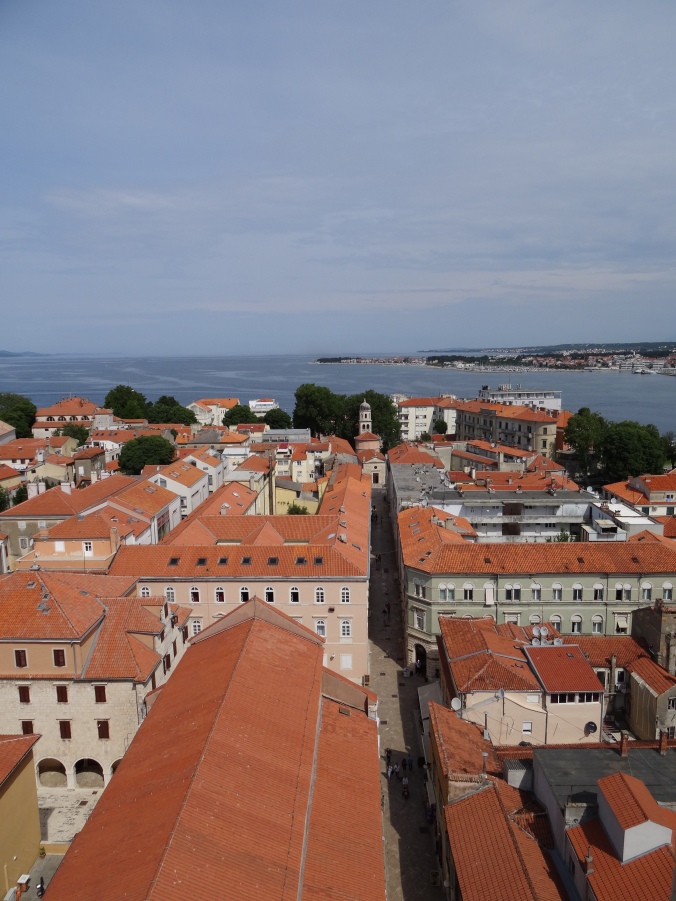 View of Zadar from the Cathedral bell tower

There are numerous other churches in Zadar and a number of museums and other sights. Unfortunately not all churches are open for viewing, such as the 12th century St Chrysogonus, named after the patron saint of the city. It is the only remaining part of a large medieval Benedictine abbey. Sadly it is rarely open. 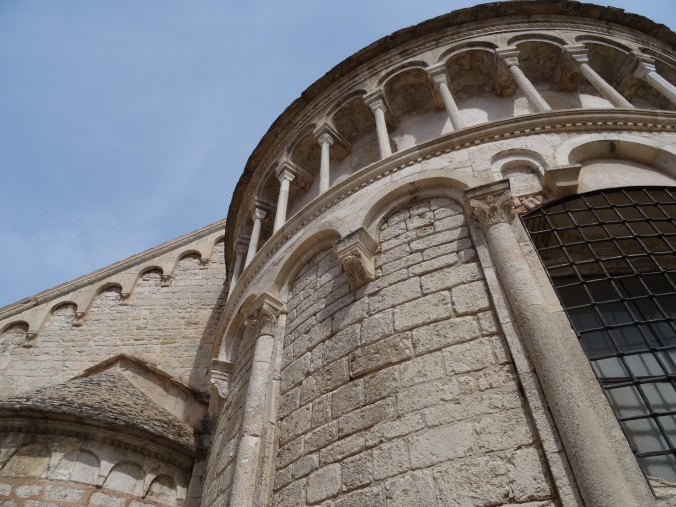 Another fascinating example is St Andrew and St Peter the Elder with parts dating from the 5th and 6th century, but with very plain and unassuming 17th century facade. 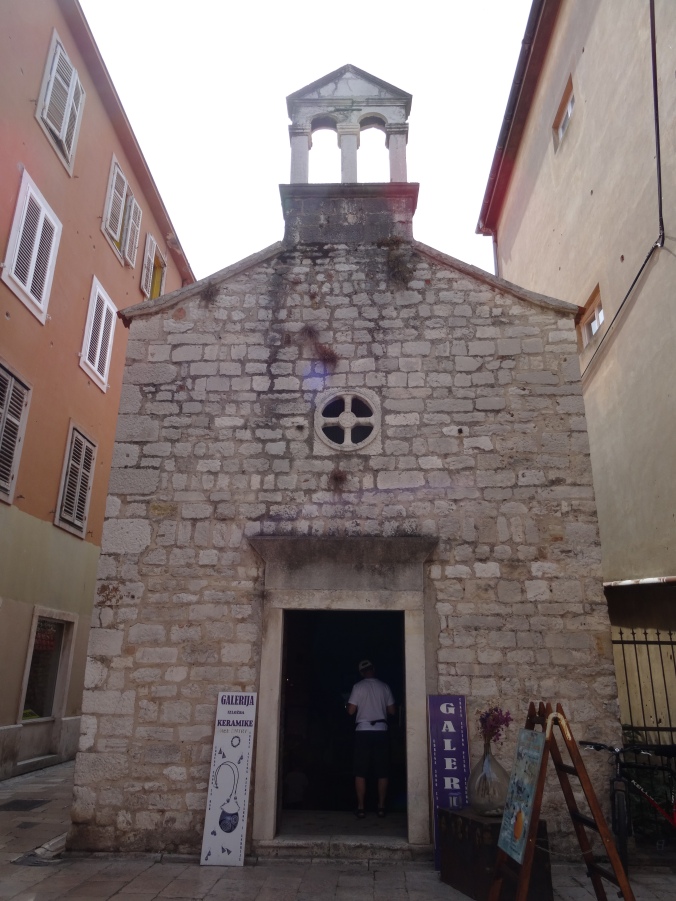 The church is now used as an art gallery selling local crafts and paintings which means its open to the public. To the rear of the very plain, central nave, remnants of 12th century frescoes survive in the apse. 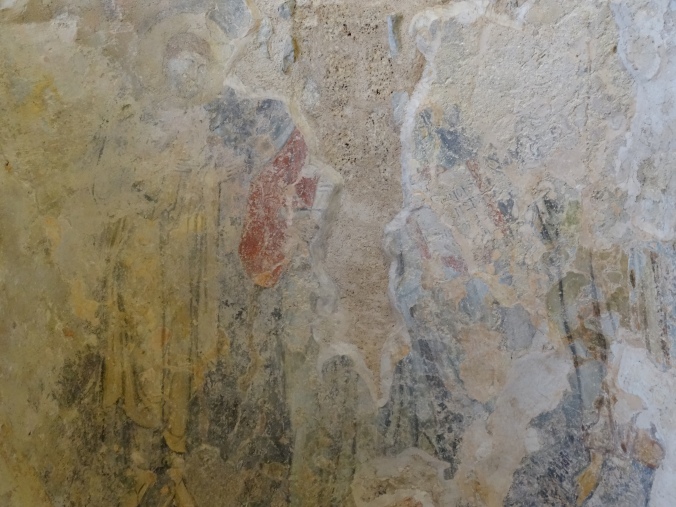 We also checked out the museum of ancient glass which is near the Port Gate – it’s only a small collection but includes ad hoc glass blowing demonstrations and a fascinating collection of Roman glass, much of it discovered in the local area. This includes some really big glass vessels used for the burial of remains after cremation. They were usually buried inside pottery urns which must account for the survival of so many delicate glass objects. I had never comes across these before so found it particularly fascinating. 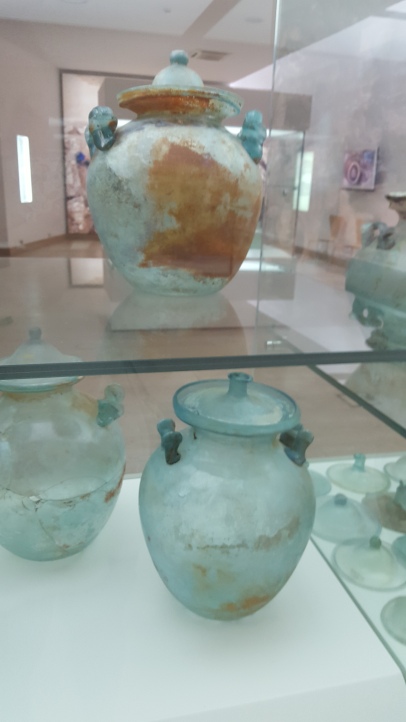 It’s not a massive collection so an hour is more than enough to have a look around before continuing a walking tour around the peninsula. Keep your eyes peeled in Zadar to spot some of the Venetian style architecture remaining from Venetian rule during the 16th to 18th centuries. 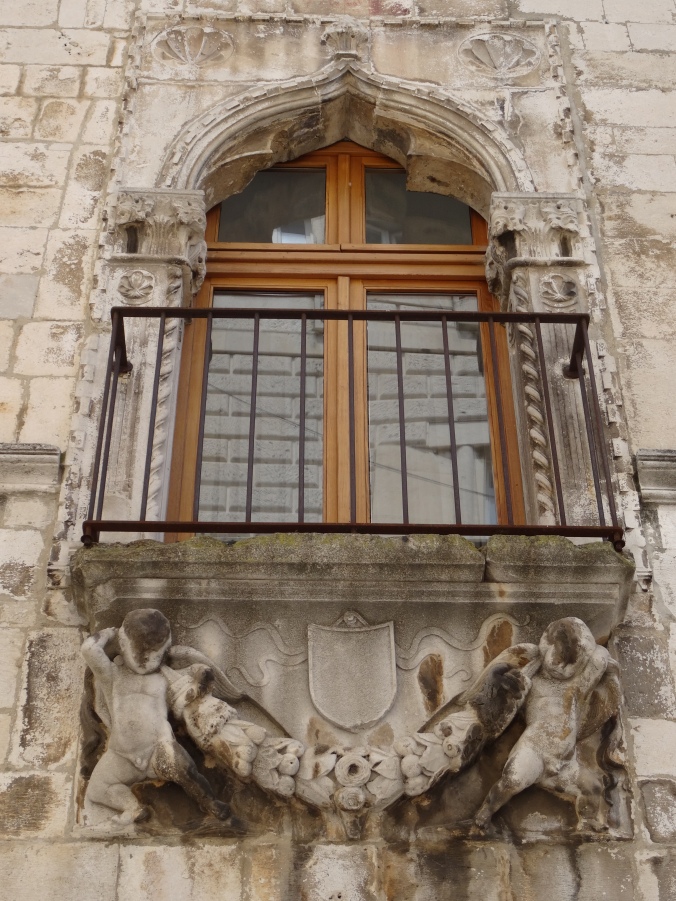 A Venetian style window in Zadar

There are a number of Venetian style windows to spot down the alleyways, as well as the Land Gate. 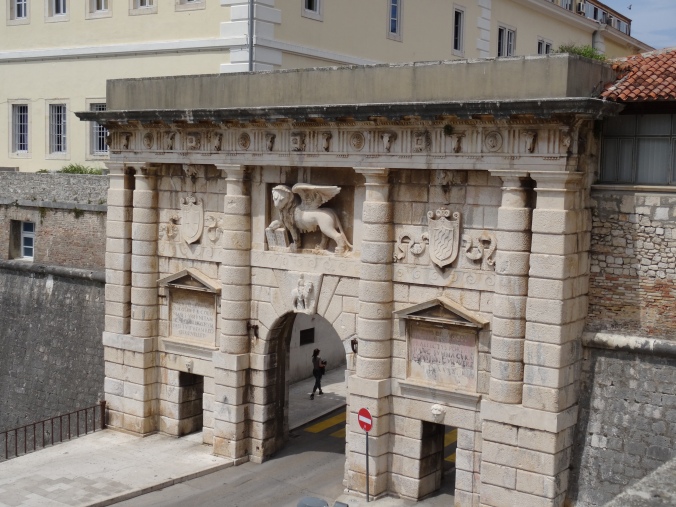 Near the Land Gate you can also check out Five Wells Square, build in 1574. The square contains, you guessed it, five wells. It’s right next to a park which gives you a shady place to hang out, complete with cafes and bars and a view over Zadar’s ramparts. 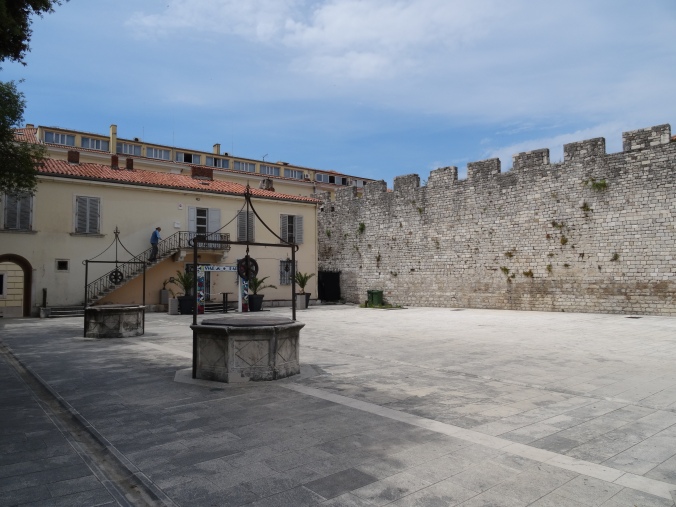 The night we arrived in Zadar we had time to sit with a drink and take in the sunset. Due to Zadar’s position and a generous viewing area where the Sea Organ and Sun Salutation are, you get uninhibited views of the sun as it dips behind the sea in the distance. For me this is an absolute must-do Zadar experience 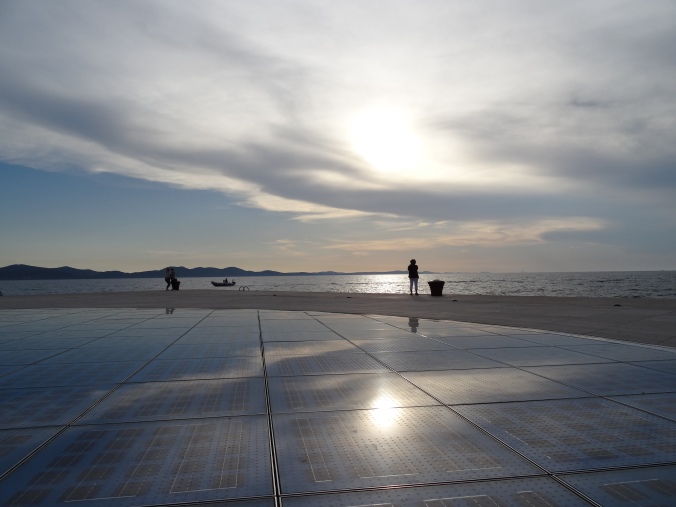 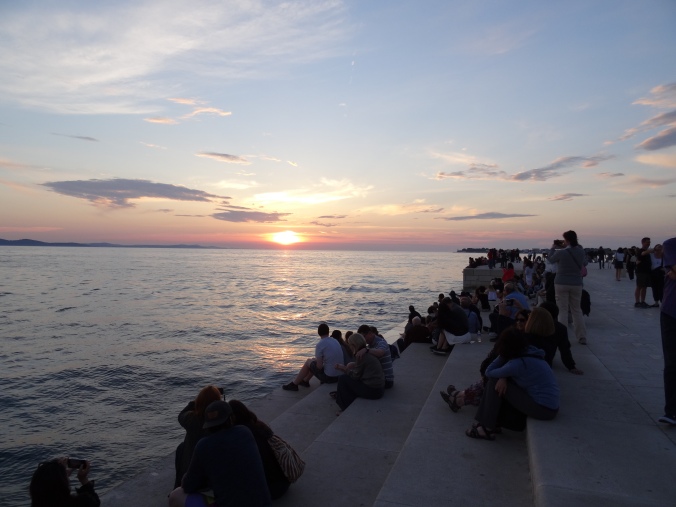 Sunset over Zadar from the Sea Organ

The Sea Organ was completed in 2005, designed by a local architect. Waves push air through the underwater pipes and through the gaps cut into the steps to create musical sounds. It’s a lovely calming experience to sit watching the sunset and listening to the organ – it really does work! Just don’t get too brave- we saw the unexpected wave of a passing boat cause not only a rather shrill crescendo from the organ but also a few slightly damp tourists who had to spring up the steps out the way.

Make sure you swing by the Sun Salutation again at night to see the ever changing light displays. 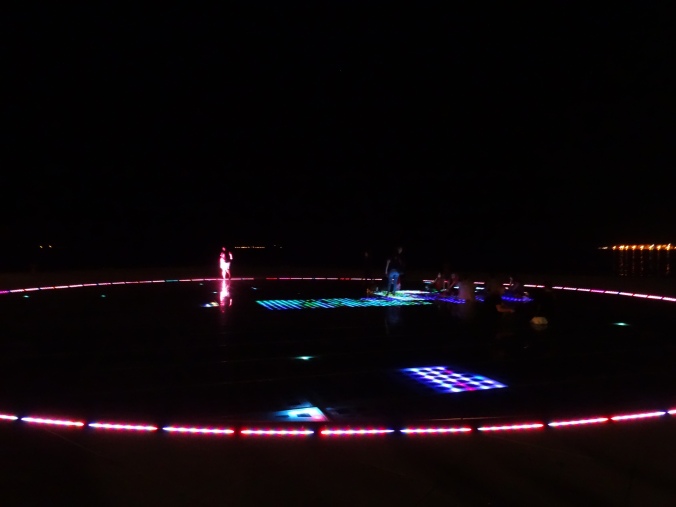 Salutation to the Sun by night, Zadar