Why go to Ohrid?

I absolutely loved the three days I spent on Lake Ohrid and it’s my new top travel recommendation to anyone. It’s a great place to relax as there are plenty of bars, restaurants and beaches around the lake and what seemed to be a fairly active nightlife as well, but there’s also loads to see and plenty of places to day trip to.

It’s a great destination for all sorts of travellers, I saw plenty of groups of students on a summer break, it’s also great for families because of the lake, and it’s an interesting place to explore with narrow winding streets and a fortress sat on top of a hill which I’m sure children would find quite exciting.

There is plenty to do around Lake Ohrid, especially if you hire a car or decide to book onto a tour. Then you can take a trip over the mountains behind Ohrid to Lake Prespa. Galičica National Park sits just above Ohrid with plenty of hiking and mountain biking trails to explore and at various points around the lake you can hire kayaks or go paragliding or scuba diving. 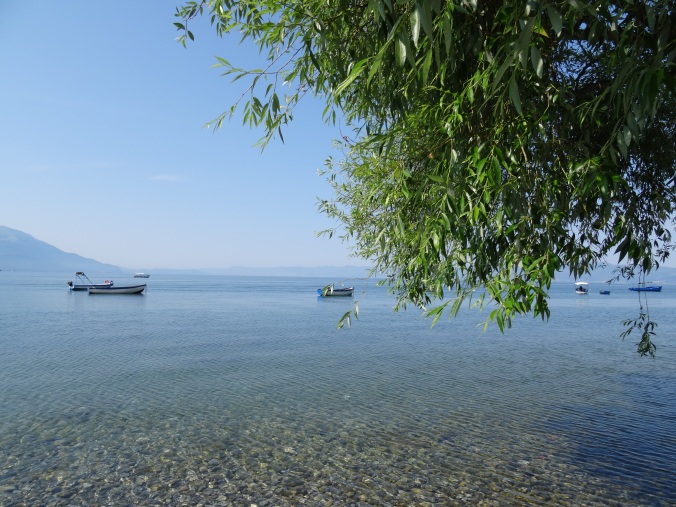 If you want more information then the people in the tourist information centre were extremely helpful. They sometimes run guided day trips around the National Park and down to St Naum Monastery for around 50 Euros a head. Misho in the information centre gave me his card, although I never booked a tour- you can track him down here https://issuu.com/misho_yuzmeski or on yuzmeski@t-home.mk.

I wanted a relaxing weekend so my itinerary was restricted to some gentle walking and sightseeing, but I was very impressed by the range of activities on offer. 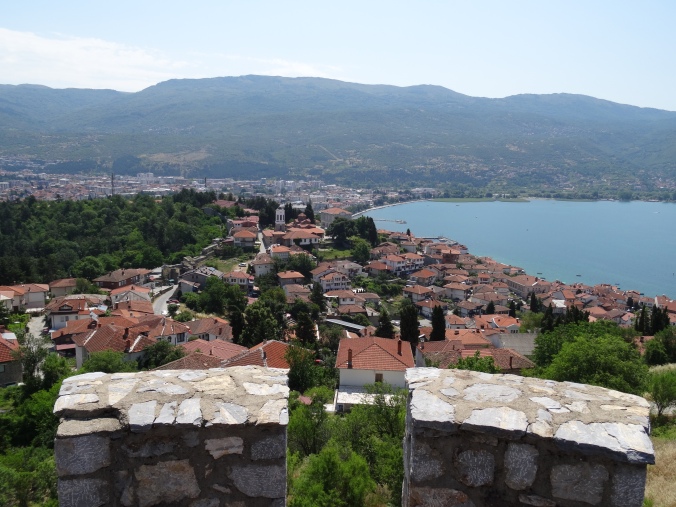 View of Ohrid from the ramparts of Tsar Samuel’s Fortress

How much will a trip to Ohrid cost?

On top of all the things you can do there, Ohrid is a great value destination – I rented an apartment for three nights with a huge double room, kitchen, living room and balcony overlooking the lake for just £90.

Entrance to each of the churches and other attractions is usually around £1.50 and meals (per person) came it at about £2 for breakfast, £5 for lunch and under £10 for dinner.

Where to stay in Ohrid

I stayed right on the lake in the centre of Ohrid’s old town. It’s not a massive place, but to save time on a short stay and avoid too much walking in the heat I wanted to be right next to all of the churches, so I picked an apartment right outside the Church of Saint Sophia- the Apartments Kanevce on Kosta Abras. I thought it was a great place for the price- you can book via booking.com.

View of Lake Ohird from my apartment

Indeed there are plenty of apartments for hire in this part of town, all of which seem reasonably priced. The other option for a longer break, especially if you have a car, would be to stay at one of the larger (and presumably better equipped) hotels further around the lake. This does mean you’re likely to be stuck at the hotel for meals unless you want to do a lot of back on forth on water taxis into Ohrid Port. I never took a taxi so I’m not sure how reasonable the prices are, but I’m sure there’s a minimum fee so it probably works out far more cost effective if you’re travelling as a group and can split the cost.

Boats on the path leading down to Lake Ohrid

This is the walking tour I attempted to do on my first day, although I didn’t quite get everything done, so you may have some things leftover for the second day.

Everything is in walking distance, although be away that some of the terrain is steep and uneven so I’d recommend comfortable shoes or trainers or you’re going to struggle. 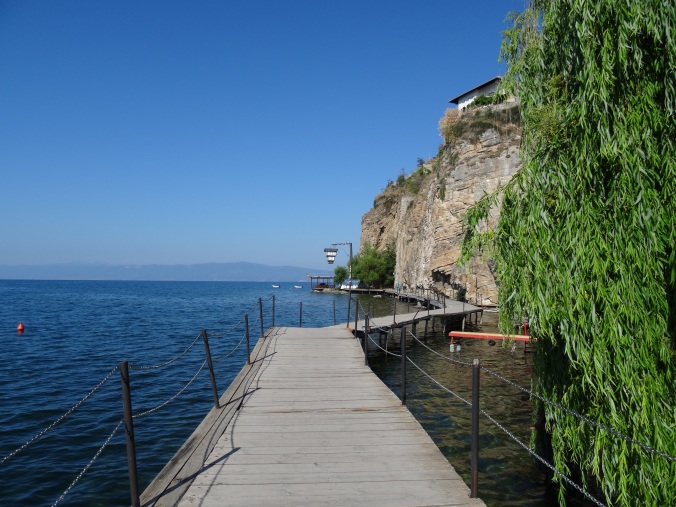 The boardwalk round to Kaneo Beach, Ohrid

First stop was the iconic St John Kaneo, the poster child for Lake Ohrid. It’s a tiny little church but has the most amazing aspect overlooking the lake on a small promontory. From the Church you can look across the vast lake towards Albania in the distance.

I really enjoyed walking up here early in the mornings to sit quietly and looking over the lake- if you get there before 9am you can beat the tourists.

The Church itself was built in the 15th century and contains some surviving frescoes, some of which were only discovered in 1964 during restoration works. 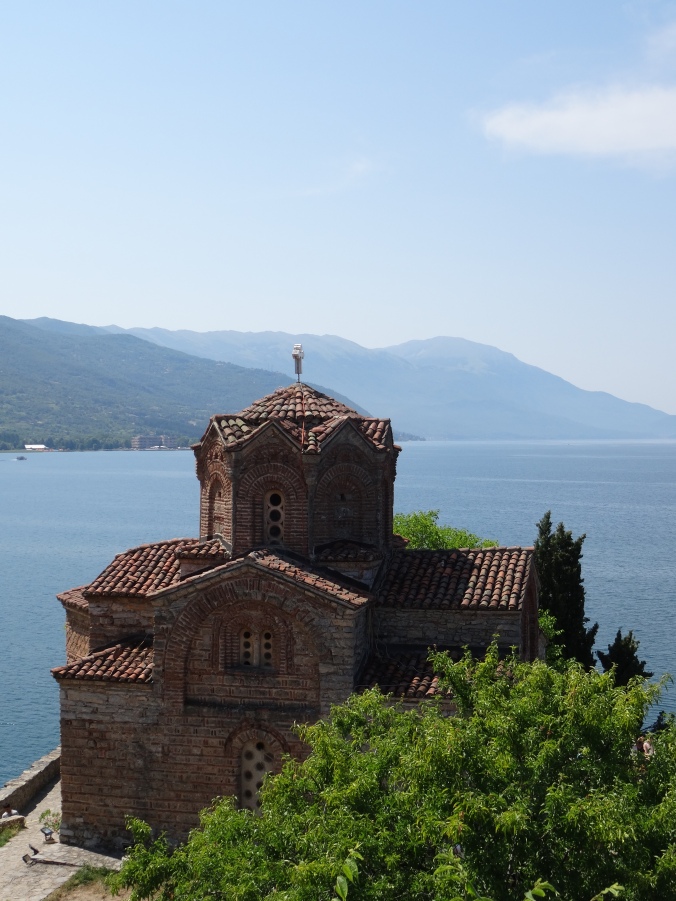 From here you can walk further up the hills through some trees up to the Church of Saints Clement and Panteleimon. The church is believed to have been designed and built by St Clement in the 9th century on the site of an existing Roman basilica. It later became a mosque under the Ottoman Empire. Ruined and restored several times in its history, it was finally restored by hand and in original materials in 2002.

The Church of Saints Clement and Panteleimon

For amazing views over Ohrid and the lake, the ramparts of Tsar Samuel’s Fortress make a great platform. The fortress was built in the 10th century by Samuel I of Bulgaria and is rumoured to have been built on an earlier fortification from 400 BC. 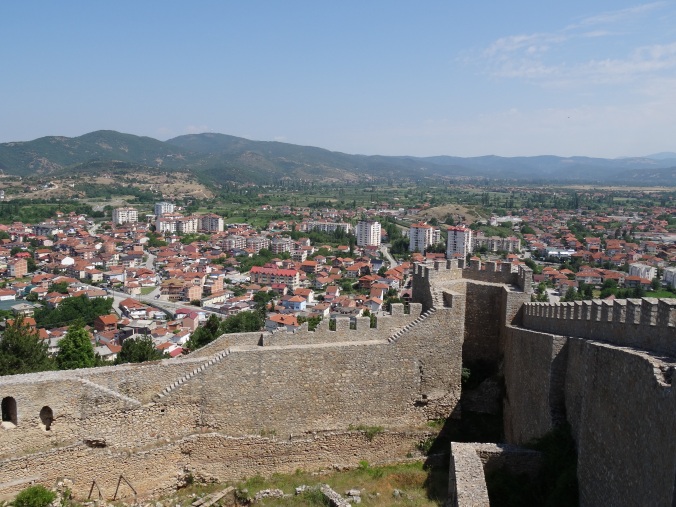 The ramparts of Tsar Samuel’s Fortress

Wandering down from the fortress you come to the Antique Theatre, the only Hellenistic theatre in Macedonia, with other remaining theatres having been built during Roman times. There’s a good restaurant next to it (I didn’t eat there but have heard good things) called Gladiator restaurant – I suggest having a break for lunch there before continuing the rest of the tour.

The 200 BC Hellenistic theatre in Ohrid

Next up, near to the theatre is the Icon Gallery (sadly closed by the time I arrived) and the Church of the Holy Mother of God Peribleptos, built in 1295. The inside of this church is almost unbelievable, so vivid are the paintings which cover every inch of it. 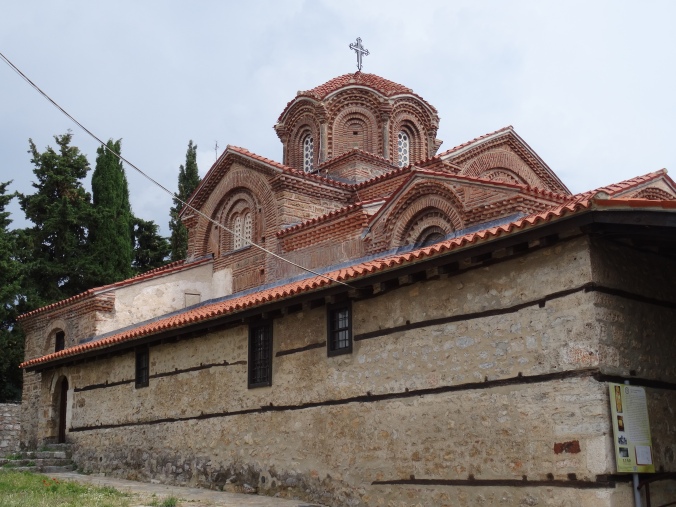 Frescoes inside the Church of the Holy Mother of God Peribleptos, Ohird

A number of other smaller churches cover the same hillside throughout Ohrid’s Old Town, most of which were shut on the couple of occasions I tried to get in, but it’s still pleasant seeking them out as it gives you a good tour of Ohrid’s steep and winding streets with the odd spectacular view across the lake.

On the way back to my apartment to get ready for dinner I headed into the Church of Saint Sophia, which was just outside the apartment I stayed at. Some of the frescoes inside date from the 11th century (as well as the 12th and 13th), making them fairly rare specimens. 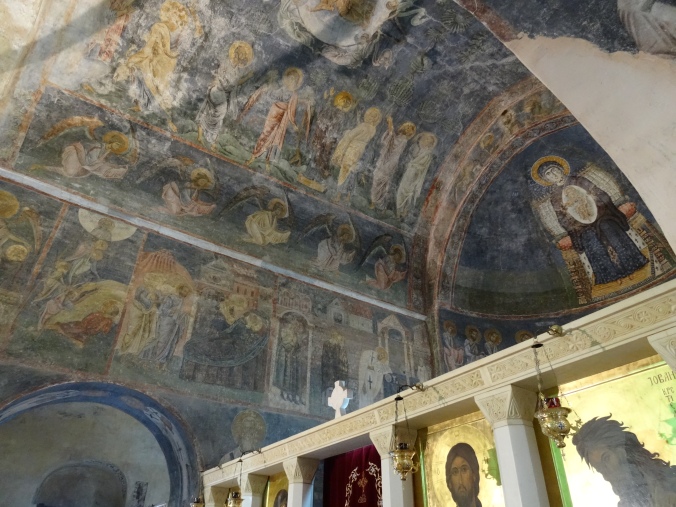 This was my lazy day to finish up some of the things I couldn’t do on the first day, like getting inside the Church of the Holy Mother of God Chelnica, which I got to too late the day before, and seeing the Icon Gallery. The Icon Gallery is just one room, but everything in it is worth seeing. It contains works from a range of eras, from the 11th to the 17th centuries, many of which had come from the next door Holy Mother of God Peribleptos.

I treated myself to a leisurely walk back up to St John Kaneo for the view, where I sat for a while reading my book before breakfast on the edge of the lake. Both Restaurant Kaneo and Restaurant Kaj Kanevche are good for breakfast where you can eat an omelette with a view of the sun on the lake and the iconic image of St John Kaneo perched up on the rocks.

I decided I should explore more of the lake, and headed around the port and kept on walking passed a number of public and private beaches, restaurants and bars. There’s plenty going on around the lake and an easy walking route which is also peppered with outside exercise equipment. Walking further around also gives you a lovely view back across Ohrid.

I also wandered around some of the busier parts of town where there are shops and more restaurants. In a square you can visit the famous plane tree, reputed to be one thousand years old. 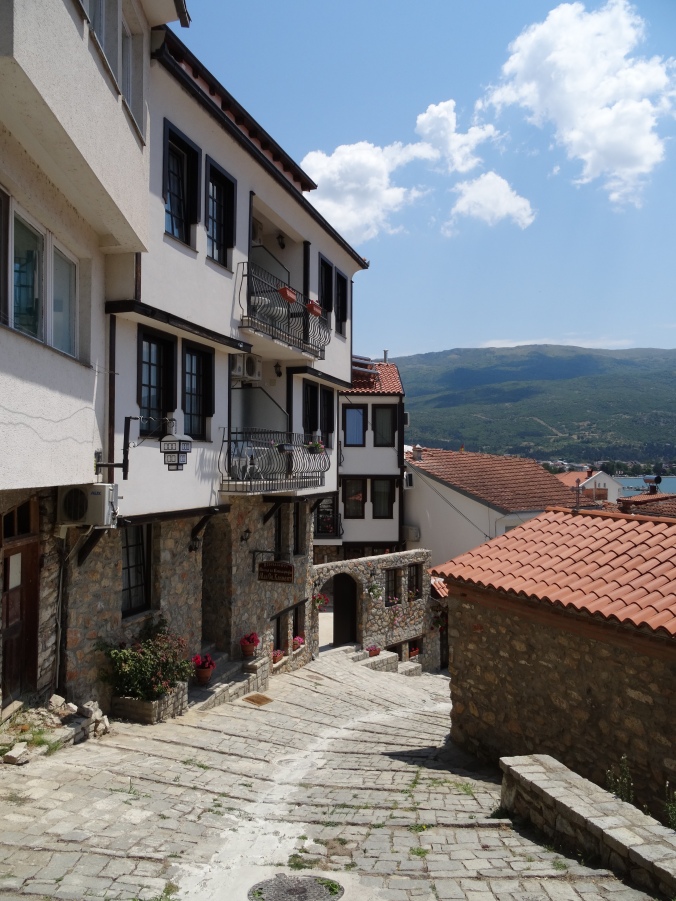 Several operators will take you on a return trip to St Naum across Lake Ohrid for 10 Euros. The crossing takes 1 hour and 20 minutes each way. Boats usually leave Ohrid Port at 10am but tend to return at different times of day throughout the week. To be sure, it’s best to head down to the port a day or two before you want to travel and make a note of that week’s sailings.

The Bay of Bones, Lake Ohrid

It’s a pleasant trip that takes you past the Bay of Bones, which I didn’t visit. It sounds like a fascinating museum which recreates a small area of prehistoric settlement where people lived on platforms supported by wooden piles anchored to the lake bed. It was only in the last 20 years that the remains of this settlement was found. The Bay of Bones Museum reconstructs a small area of this settlement how archaeologists thought it would look between 1200 and 600 BC. 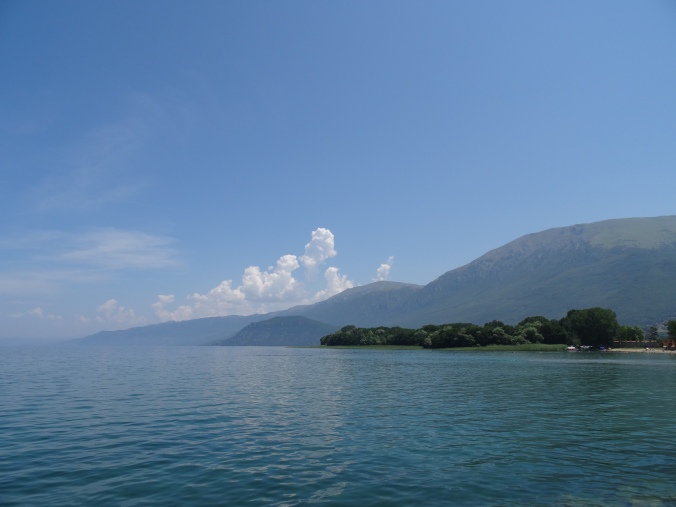 Once the boat docks, it’s a short walk up a small hill to the St Naum Monastery which is perched on cliffs overlooking the lake and sits close to the border with Albania. The grounds outside the monastery are landscaped with shade and places to sit. 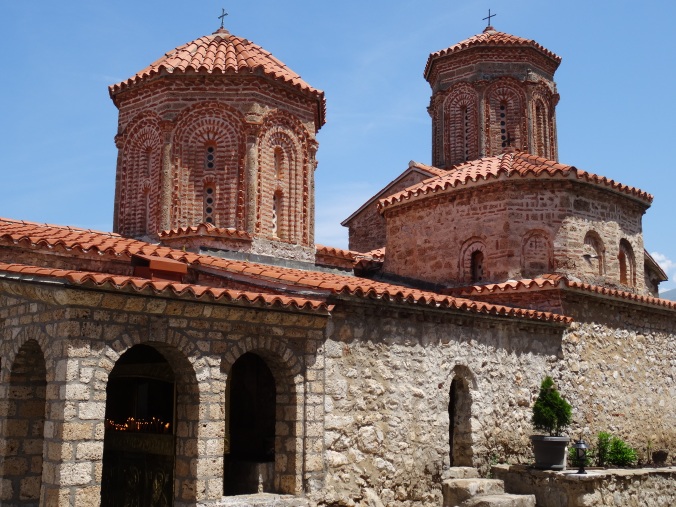 It’s home to quite a few peacocks who roam the grounds, frequently displaying their tail feathers.

A peacock at St Naum Monastery

The monastery was established in 905 by St Naum of Ohrid and is totally decorated inside with frescoes as well as an elaborate iconostasis covered with beautiful icons. It’s worth spending some time inside to really inspect the decorative scheme, although you may have to wait while the tour group traffic ebs and flows in the tiny chambers. You’re not supposed to take photographs (here or anywhere else inside, in fact), so I may have broken the rules a bit- although I never use a flash to avoid causing any damage to the paintings.

While at the monastery you can walk down to the Springs of St Naum and take a small boat out across them. The springs are fed from Lake Prespa and are astonishingly clear- from the boat you can apparently see them rising up through the lake bed. There are a few restaurants nearby for some lunch before heading back to Ohrid.

The springs of St Naum

I might have fallen asleep in the boat on the way back (!) but luckily woke up as we approached the port to take one final photo of Ohrid complete with St John Kaneo and the fortress as we pulled back in to Ohrid. I had time to pick up my case and head to the airport (it takes about 15 minutes and costs 10 Euros) and it was time to leave. I absolutely loved this trip and will definitely be back to Macedonia!