Hidden gems in Rome to avoid the crowds

So many people travel to Rome and never scratch the surface of what’s on offer. It’s understandable; few cities have so many iconic and historically important sites littering the streets in the same way as Rome. Part of the joy of Rome is that you can’t move for tripping over Roman ruins and it seems every one of its 900 churches has a Caravaggio, Tintoretto or Veronese stashed in the back somewhere.

With so much on offer it’s not only difficult to know where to start, it’s easy to overlook the ‘lesser’ gems which are no less historically important or interesting but get lost in the noise of Colosseum selfies and room upon room of Vatican treasures. 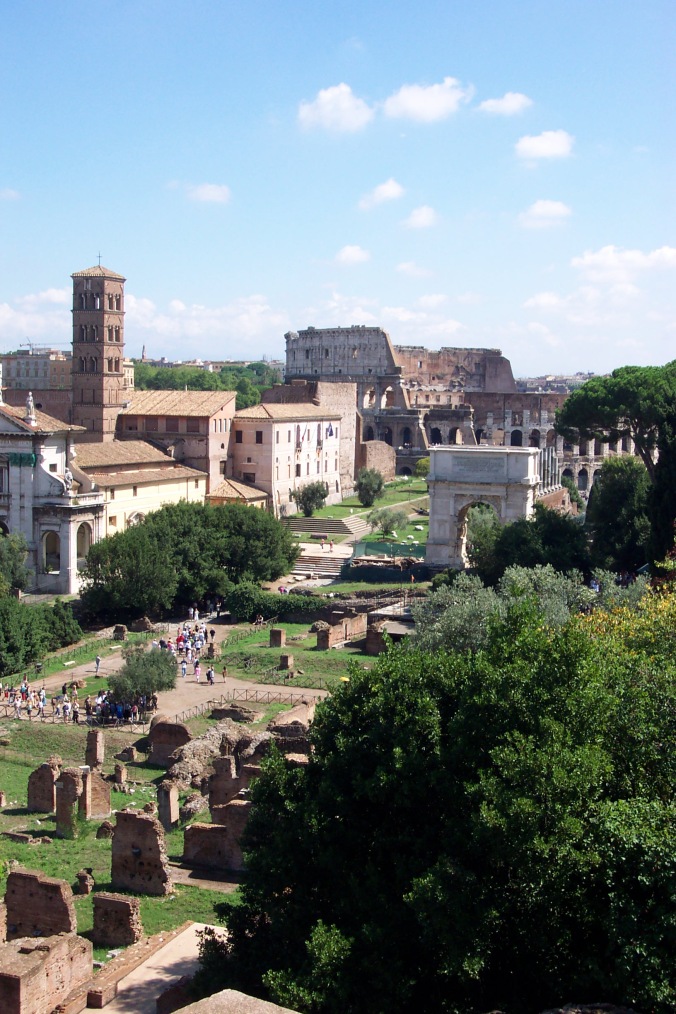 Rome, where the streets are paved with archaeological gems

Having been to Rome on a number of occasions, including one visit which I used largely as a revision exercise for my degree (some time ago now!), I’ve had enough time to explore the main sites as well as some which are more off the beaten track.

I’m not advocating skipping St Peter’s or the Vatican museums, but there’s more to Rome than the big names and in the face of a sightseeing list which might exceed more than you could see in a lifetime of visits, I want to point out some of the places I enjoyed visiting most over the years that you won’t see on any guide book ‘top 10 must-sees’ list.

This might well be on some must-see lists due to its importance, but I’m sure it still struggles to make it onto most travellers’ shortlists.  The Lateran Basilica is in fact Rome’s cathedral and the mother church of Roman Catholicism globally, superior to all other churches in Rome, including St Peter’s. 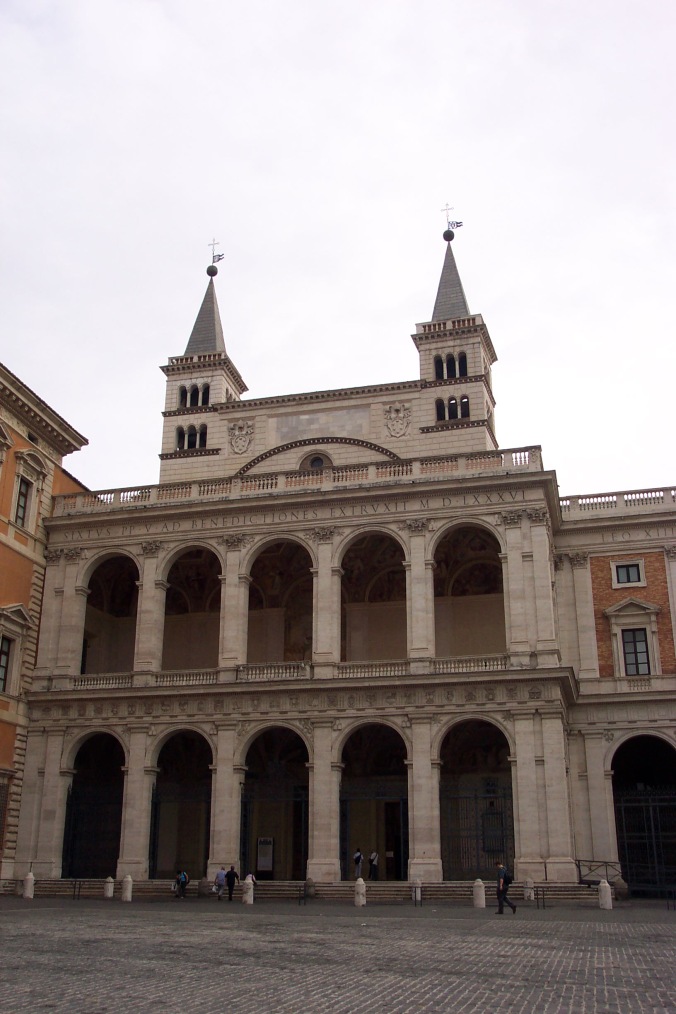 It started life as an ancient Roman palace, passing to the emperor Constantine as part of his wife’s dowry and becoming the main Papal residence in the 4th century. It was the papal residence for over a thousand years until the popes moved over to the Vatican. With a chequered history of fires and vandalism (in the very literally sense, being partly ruined by the Vandals in the fifth century) it has been reconstructed several times and therefore is a muddle of architectural styles and decoration. 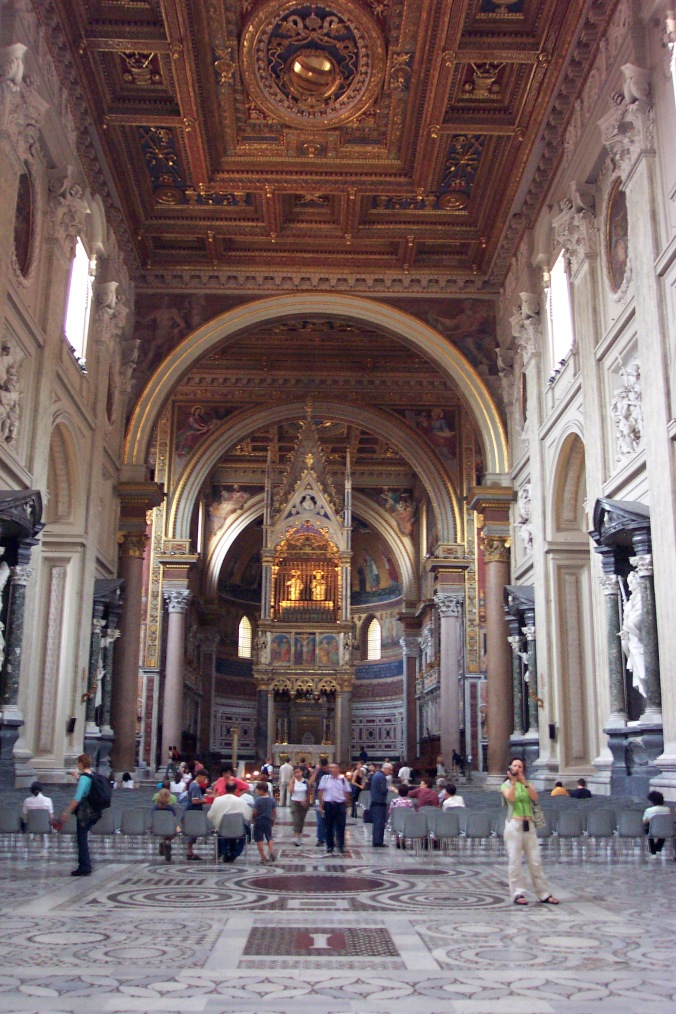 Next to the Basilica is the Lateran Palace which is home to the Scala Sancta, 28 marble steps said to have led to the praetorium of Pontius Pilate in Jerusalem, which Christ ascended to trial. They were allegedly brought to Rome in the 4th century by St Helena, who also allegedly discovered the True Cross. Worshippers may only ascend the stairs on their knees. 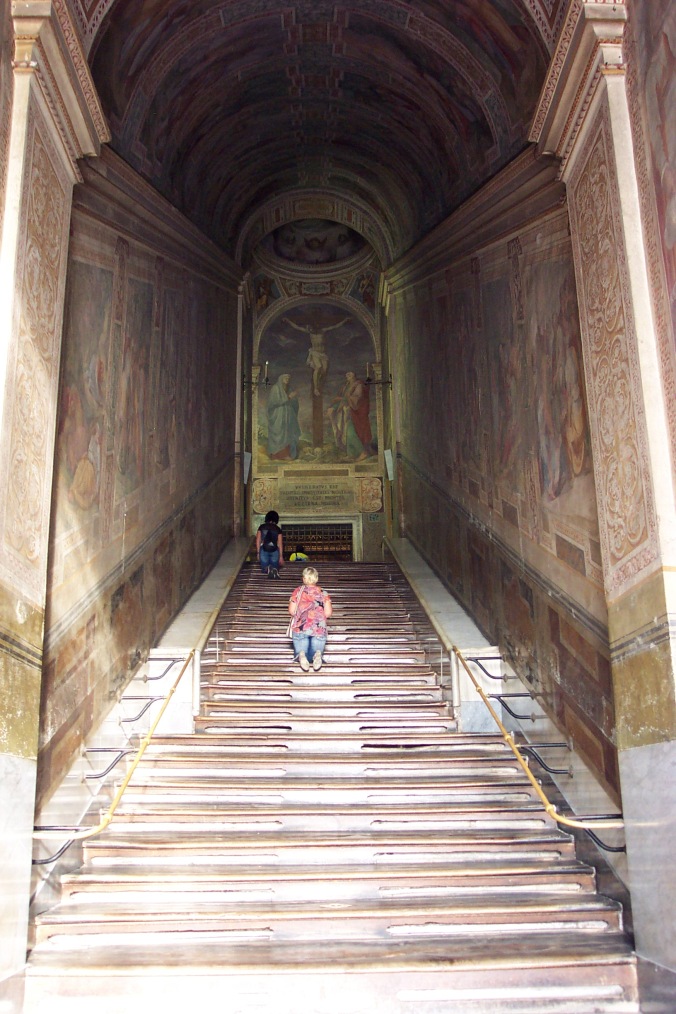 A ten minute walk from the Lateran Palace is the Basilica di San Clemente in Laterano. A 12th century church built on top of several earlier churches dating all the way back to the 1st century.

The 4th century lower church was the venue for a number of papal councils in the fifth century. After being destroyed in the 11th century it was not rediscovered until 1857 and was excavated 4 years later.

The mosaics in the apse of the upper church were commissioned by Pascal II in the early 12th century and show a delicate design of vines and acanthus encircling various saints and doctors of the church. The central motif is a crucifix covered in white doves with the Virgin and John the Baptist each side. Sadly I only have one fairly poor quality photo of the apse mosaics…probably a good excuse to go back.

The apse mosaics of San Clemente

The Domus Aurea, Nero’s huge ‘golden palace’ was built by the emperor Nero in AD 64 and now lies beneath the ruins of the baths of Trajan. It has not always been open to the public and remains more difficult to access than many other sites. Tickets appear to be available through this website, so make sure you book to get onto a tour as it’s not open every day. 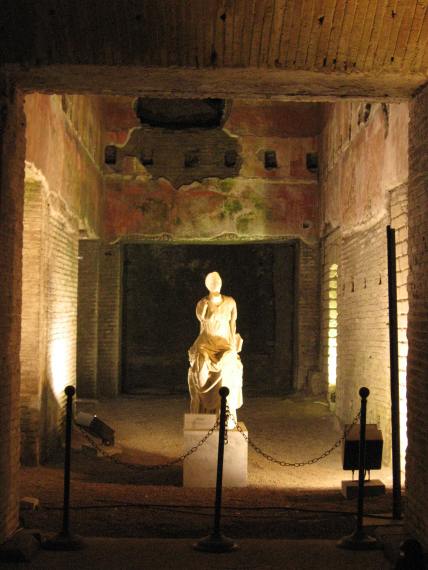 A number of architectural techniques appear to have been used for the first time in the construction of the Domus Aurea which were later used in other buildings to great effect. These include a concrete constructed dome with central oculus and the use of mosaic tile on walls and ceilings rather than only being used on the floor. 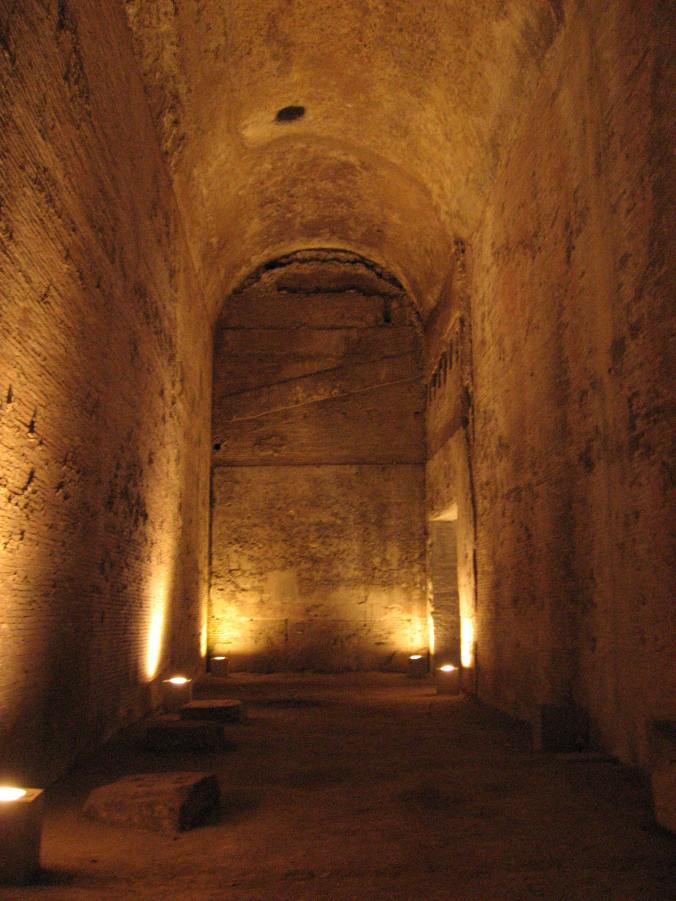 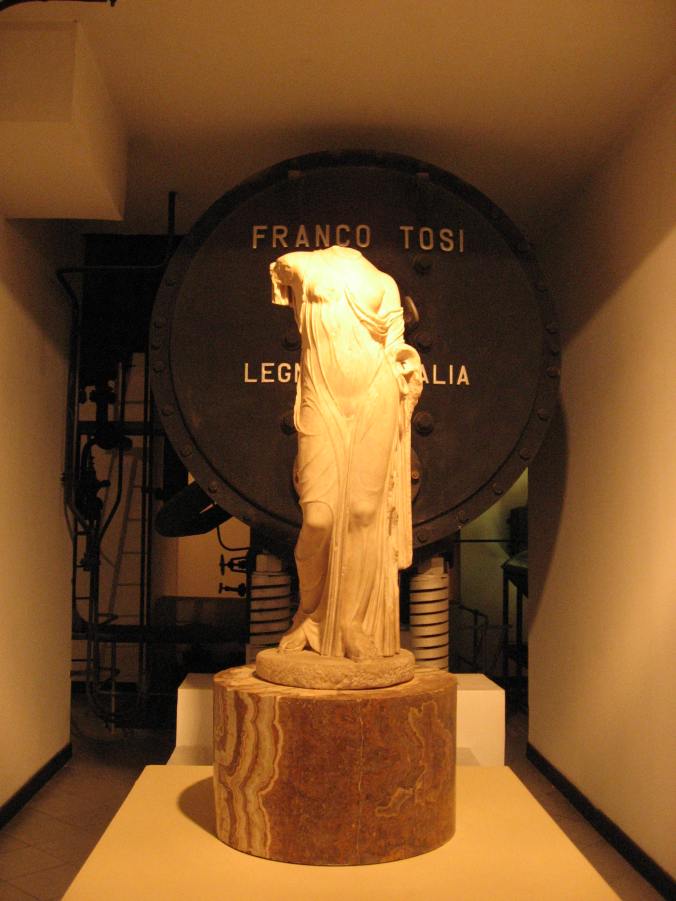 This space was initially set up as a temporary exhibition of sculpture from the Capitoline museum when part of it was closed for renovation. It was so well received that it remained open as a permanent exhibition of around 400 ancient sculptures. Many of the sculptures are from the Gardens of Sallust. 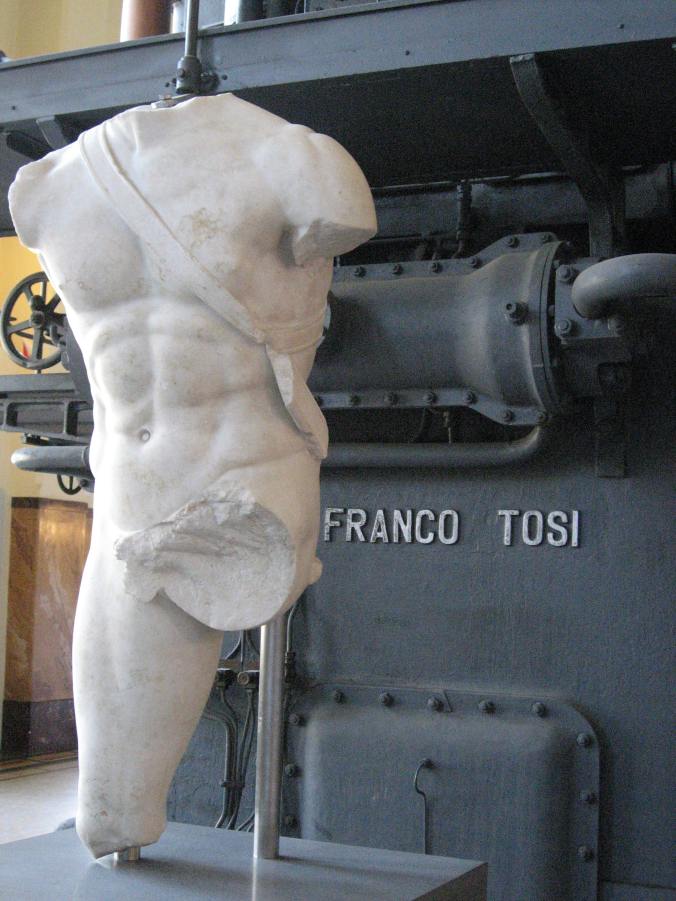 The sculpture is displayed alongside the leftover machinery from the Giovanni Montemartini Thermoelecrtic Centre, built in 1912. The beautifully designed and polished machines strike a real contrast with the supple marble statuary. In contrast to many displays in Rome, the sculptures are sparsely spaced in the cavernous building, giving you more space and time to wander around and appreciate the pieces. Rome can quickly give you art fatigue, and this is a great antidote. 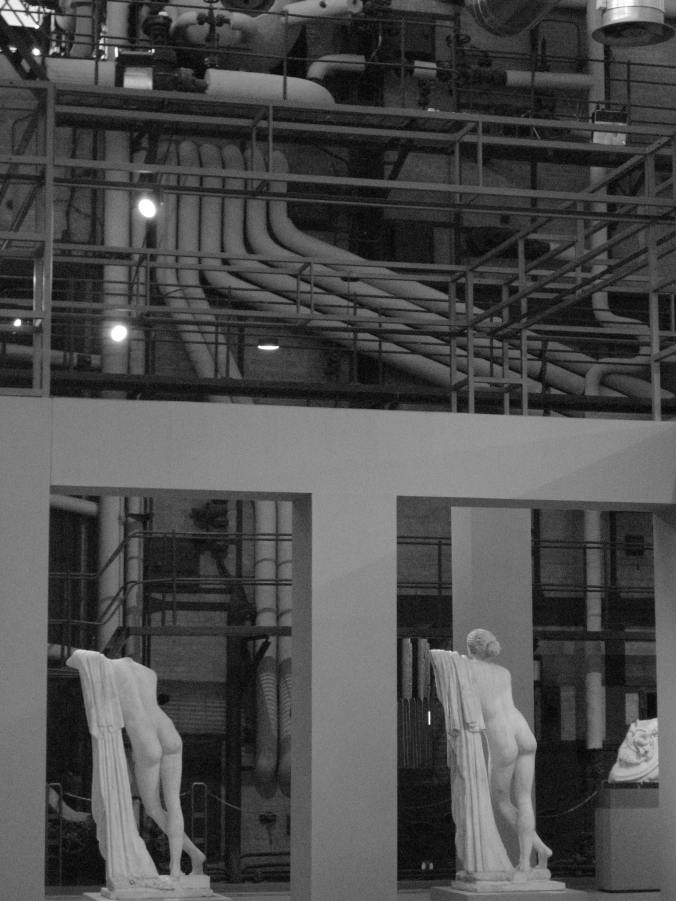 The collection is a bit further out from central Rome, but easy on public transport and well worth the effort for a truly unique display which is often overlooked by tourists.

Part of the National Roman Museum which often plays second fiddle to the works in the Capitoline collection, Palazzo Massimo alle Terme contains and fantastic array of archaeological finds. Some important works are also housed in the nearby Baths of Diocletian. 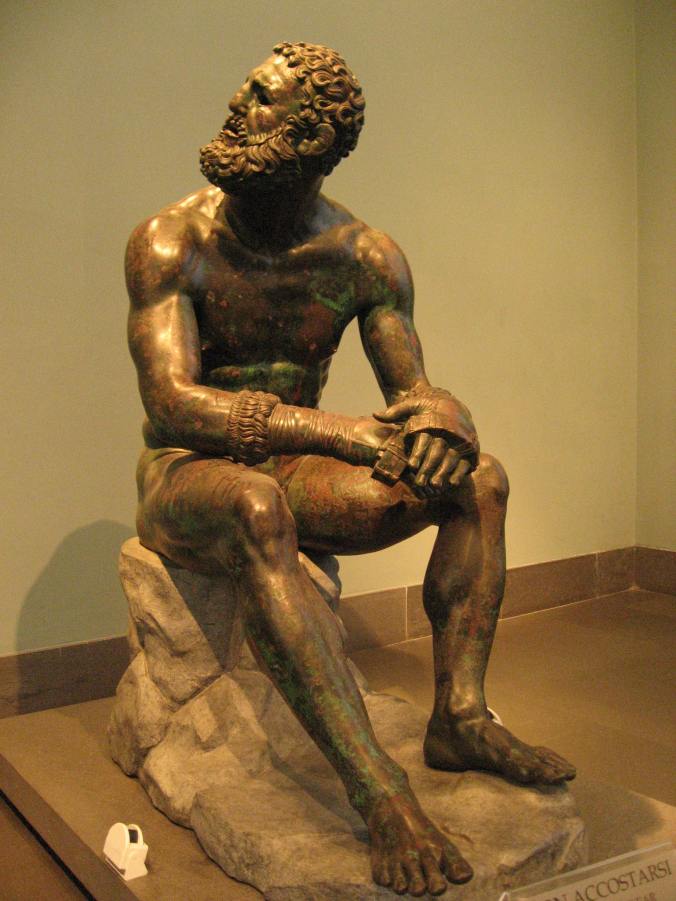 The collection includes one of the finest statues of antiquity, the Terme Boxer (or Boxer at Rest) signed by Apollonius and dating from the 1st century BC. The fine detail and sympathetic rendering of the boxer resting while still wearing his boxing wraps makes it look at though he might start to move at any moment. He has the characteristic face of a boxer with broken nose and cauliflower ears. Bronze statues are rare survivals from antiquity compared to their marble counterparts due to the ease with which they could be melted down and remodelled. This statue is a rare tribute to the skill of ancient sculptures.

In addition, the collection houses two marble copies of Myron’s 450 BC Discobolus (the discus thrower), described by Pliny the Younger, and a number of different Aphrodites of different types.

I know not everyone has the same tastes as me, but if someone tells me there are Roman ruins covered in rescued cats, I’m going to be there. Happily, such a place exists right in the centre of bustling Rome. If you get to the point that you can’t bear to see another Caravaggio (sounds ridiculous, but it can and does happen in Rome) then take a trip (and some money) to Torre Argentina Cat Sanctuary. 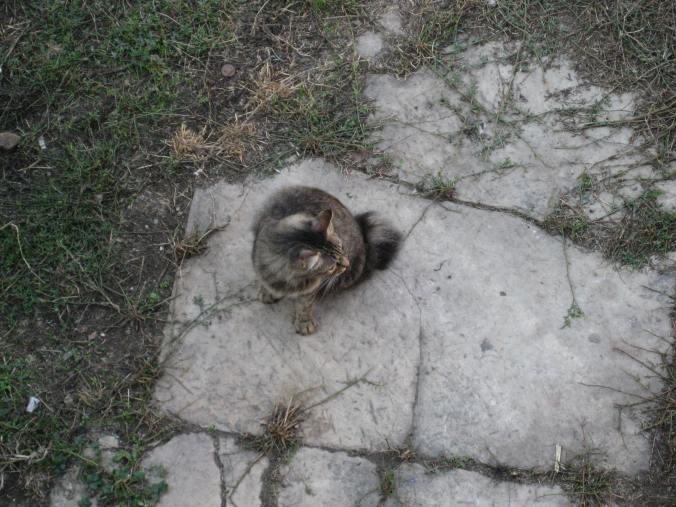 The sanctuary is home to around 150 cats nestled among the ruins of one of Rome’s oldest temples dating from 400-300 BC. The organisation does great work, caring for a number of cats with special needs. They also have a nice little gift shop on site. Stop by for a fuss and to give them a donation to support a great (and adorable) cause. 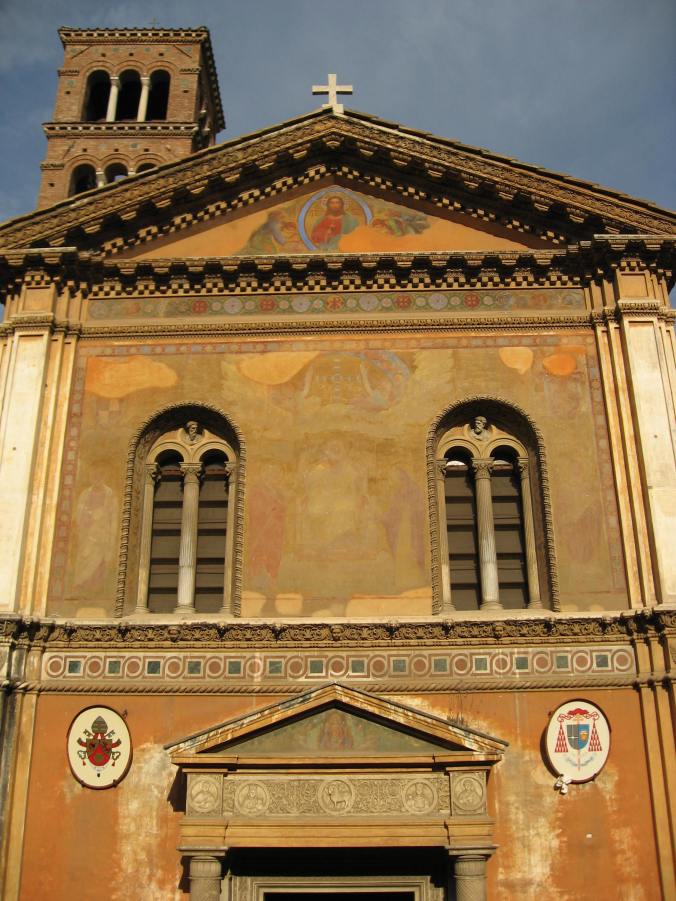 Santa Pudenziana is an unimposing church with a 19th century facade, although it is one of the oldest churches in Rome dating from the late 4th century. It was built above a 2nd century thermal hall and although rebuilt several times, an interesting 4th century mosaic survives in the apse. 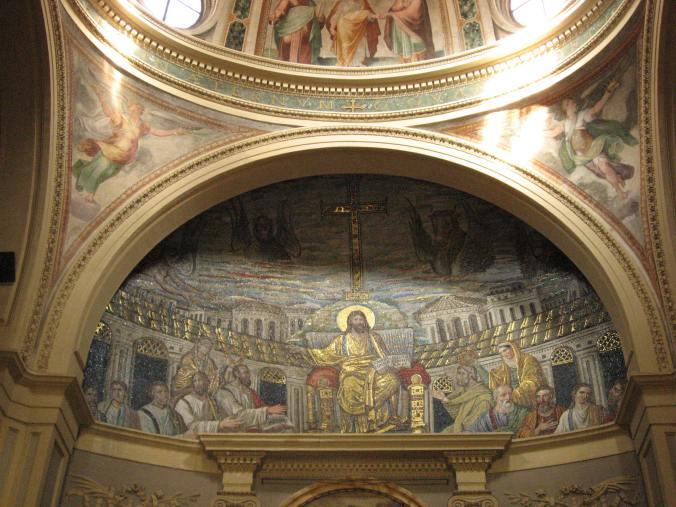 Fourth century mosaics in the apse of Santa Pudenziana

The mosaic is notable for the Roman character of the figures, markedly different from the later byzantine style and making it seem a much later work to the untrained eye. The gestures of the Apostles around Christ call to mind those of acclamation scenes of late Roman emperors. The buildings behind the figures also look distinctively Roman. It’s a spectacularly unusual example of early Christian art dating from the time when Christianity was first declared the state religion of Rome.

The Campanile is thought to date from the 12th century. 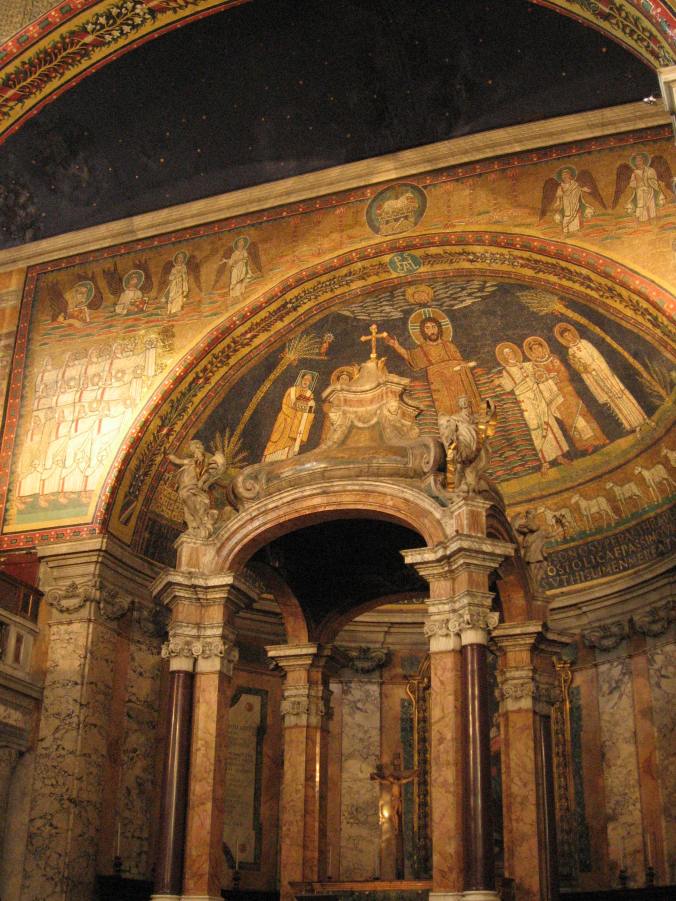 Entered through an inconspicuous side door, this church is one of three founded by St Paschal I, all still adorned with 9th century mosaics he commissioned. The most extensive of these decorative schemes survives in Santa Prassede. The St Zeno chapel, built as a mausoleum for Paschal’s mother, Theodora, in 817-824 is unique in Rome in being entirely covered in mosaic and shows the image of Christ borne aloft by angels. 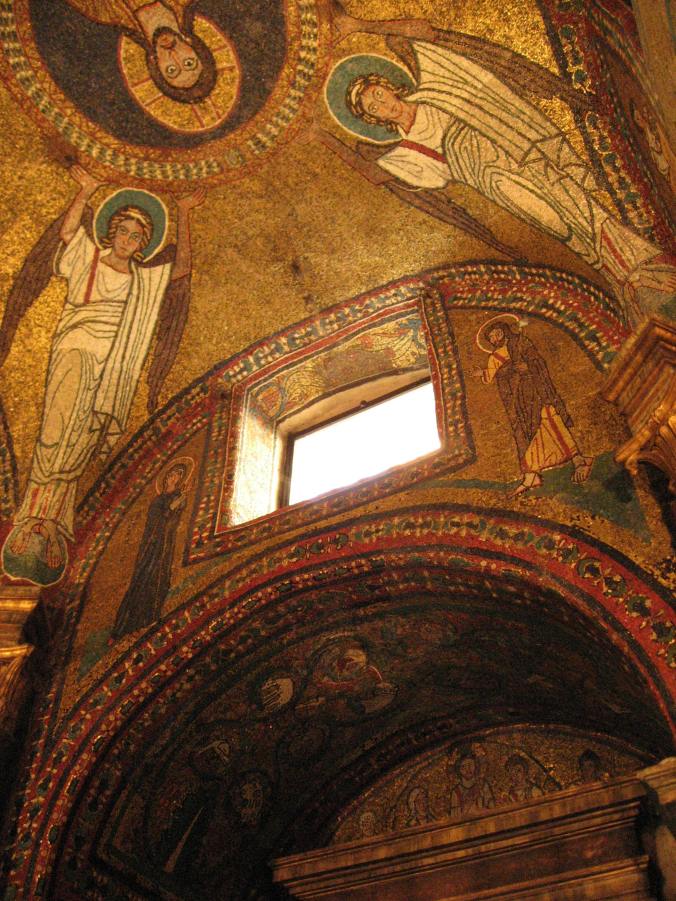 Further fine mosaics from the same period decorate the apse and apse arch depicting the Lamb of God, New Jerusalem and the 24 Elders. For mosaics of the same era, also commissioned by Paschal, visit Santa Maria in Trastervere.

I’ve put all of these hidden gems onto a map so you can see how they would fit together into a sightseeing itinerary.

With the exception of Centrale Montemartini, these sites could all be visited as a full day’s itinerary on foot, although it would be quite a full day and does cover nearly 6km. Alternatively you could mix them in with some of the big hitters as part of a longer itinerary as they’re spread through central Rome.

You can get to Centrale Montemartini by taking the B Metro line to Garbatella, from where it’s about a ten minute walk. The B line passes through Termini, Cavour and Colosseo, so you could easily head there from central Rome after some other sightseeing.